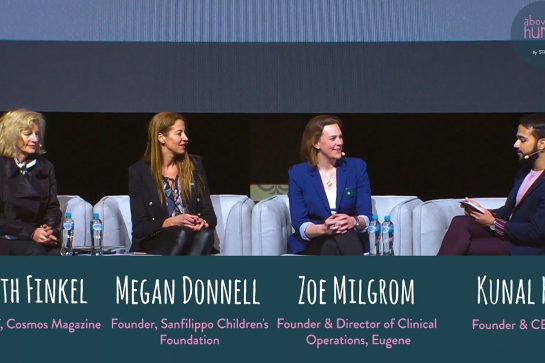 At #AAH2018 we hosted a panel discussion on Genomics with leading field experts.

The Powers, Perils and Potential of the Genomic Revolution

Kunal Kalro is the founder and CEO of Eugene, a genetics and health startup empowering people with expert, convenient and compassionate healthcare. He is a relentless advocate for addressing systemic biases in healthcare to create equitable access to promising new genomic technologies.

Megan Donnell is the founder of the Sanfilippo Children's Foundation and for her, it's personal. Her two children, Isla and Jude, both suffer from the rare and fatal genetic childhood disease, Sanfilippo Syndrome. To date her foundation has invested over $3m into 12 medical research projects in to this disease including bringing a pioneering gene therapy treatment for a clinical trial to Australia.]

Elizabeth Finkel is a former biochemist who now tells the stories of other scientists, as a writer and editor. Since June 2013 she has been Editor in Chief of Cosmos Magazine. She has published two books: "Stem Cells: Controversy at the Frontiers of Science" in 2005, which won the Queensland premier's Literary award and "The Genome Generation" in 2012. In 2015, she won the Eureka Award for Science Journalism.

Zoe Milgrom is the founder and Director of Clinical Operations at Eugene, a genetics and health startups empowering people with expert, convenient and compassionate healthcare. As a trained genetic counsellor, she's spent the last decade supporting people's journeys at every stage of life; from pregnancy and birth to planning for death.