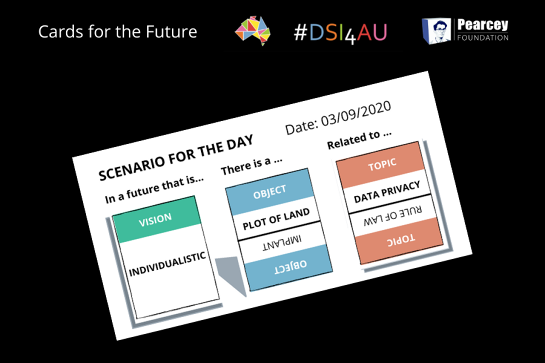 'Cards for the Future' Game Day 4

"In a future that is INDIVIDUALISTIC.
There is a PLOT OF LAND.
Related to DATA PRIVACY."

What is Cards for the Future?

Cards for the Future encourages people to think about positive visions of technology and society through play. For five days of the DIF2020 Festival, from Monday 31 August to 4 September.

The objective of the game is to imagine inspiring, positive ideas for objects and concepts from the future. These are inspired by a scenario, which is shaped collectively through 'prompt cards'.

We’re used to the future being presented to us as bleak, from global warming to increasing economic inequality. But another future is possible - one where technology is used to tackle the challenges of the years to come, and where it unites us rather than divides us. And how better to imagine that future than through play and games!

Lead by Kelly Hutchinson, Founder of DSI4AU, and Deputy Chair of the Pearcey Foundation and champion of digital social innovation. This open innovation experiment saw players co-create a sociotechnical imaginary. A crowdsourced vision of desirable futures where humanity shapes technology.

Each day a new round was played with opportunities for players to pitch their idea for the future. All the players full ideas are posted on a daily Trello board as inspiration for.

Want to Play the Bonus Round?

If you'd like to play then then imagine and write your idea inspired by the scenario.
What do you think it is? Send us your ideas via social media Facebook or Twitter or email us.

ACKNOWLEDGMENT: 'Cards for the Future' was developed as part of the DSI4EU project by Nesta UK, based on Situation Lab’s 'The Thing from the Future'. The game has been adapted to an online format by DSI4AU. The game is published under a Creative Commons license CC BY-NC-SA 2.0.
IMAGE: Hosier Lane, Melbourne, September 2015. Kelly Hutchinson. "For peace and love, please make a message of hope."