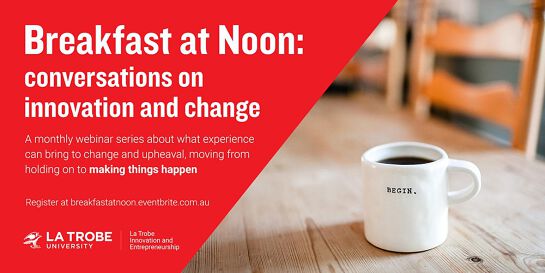 Breakfast at Noon: conversations on innovation and change

In a time of uncertainty, learning to adapt to change and being innovative is the key to success.

In this monthly online webinar series, we invite you to join conversations about learning to adapt and continuing to grow especially during a time of the unknown. Breakfast at Noon is an informal way get into the minds of entrepreneurs and change-makers and learn how being creative, innovative and an opportunist can help you succeed.

So bring a cuppa and join the conversation!

Jason is a seasoned management practitioner with over 18 years' experience in brand, engagement, communications, social media, marketing and customer experience. He specialised in crisis management and communications, which has come in handy during the collapse of the tourism sector due to COVID-19.

He completed his Master in Business Administration (MBA) from the University of Waikato, and is an avid supporter of telling the Waikato story to everyone he meets.

He has been a strong and passionate advocate for the Mighty Waikato and its people, and has been leading Hamilton & Waikato Tourism as its Chief Executive Officer since 2016.

By day, he promotes all things Waikato from glowworms to hobbits, and by night he can be found tweeting & instagramming his latest foodie find.

Sessions will be recorded and are available for download upon approval of the speaker - please email accelerator@latrobe.edu.au

Your host for the series is Marcus Powe. Marcus founded EIC Growth Pty Ltd to assist CEO’s and leaders implement, embed and measure creativity and innovation systems that result in enterprising behaviours. He specialises in the growth of for profit and not for profit organisations that operate in the turbulence of national and international market places. Marcus has twice been awarded by the Business and Higher Education Round table as Australia’s Best Entrepreneurial Educator and for sustained excellence in collaboration between business and universities in Australia.

At the end of each event, you will be hearing from Jaxon Hickey who will provide 'The Jaxon 5', the top 5 takeaways and tips from the conversation. Jaxon Hickey has been involved in and led entrepreneurship activities as a founder, educator and director across large global markets. In his current position as Director of Global Strategy and International Operations, he leads the International expansion of a New Zealand based software company into the North American markets. He also educates entrepreneurship and innovation across two leading Universities in Sydney and Melbourne.